Home » U. S. History » Unknown History: A User’s Guide to Getting Involved in Democracy—Petitions and Protests

Unknown History: A User’s Guide to Getting Involved in Democracy—Petitions and Protests

How do you get involved in U.S. Democracy? Here’s a crash course on next-level civic participation. It’s time to put your money or your giant poster board sign where your mouth is. 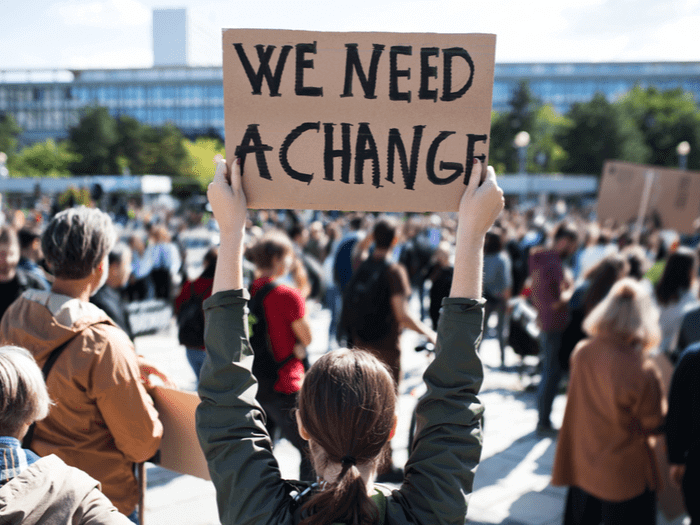 On the last episode we featured from the Unknown History podcast, we talked about elections and the Electoral College. If you missed it, make sure to check it out to keep your civic skills sharp.

Today, we’re talking about what you can do to participate in government. This is crucial information as we slide into a contentious election season.

How to make your voice heard in government

What’s the first step on the road to making this democracy work for you? Make sure you’re heard by the people who are making the laws for your life.

Did you know that, before he became our fourth president, James Madison served four terms in the U.S. House of Representatives? Madison was a true champion of Congress’s responsibility to “We, the People.” He believed the House should have, “an immediate dependence on and sympathy with the people.”

And before we tell you how to win that sympathy, a little reminder: That immediate dependence Madison was talking about? Congress is only in power because we put them there. Even the most cynical of citizens has to admit that there is a baseline reason why Congress has to listen to us. If they don’t, we can choose not to vote for them.

Alright, now we’ve established who holds the reins—we do. How should you go about being heard by your representatives?

Petitioning for a redress of grievances

It’s right there in the first amendment to our Constitution—we have the right as American citizens to petition the government for a redress of grievances. The quickest, easiest way to do that is by phone.

Alexander Graham Bell invented the telephone in the late 1800s. By 1900, Congress was getting hundreds of calls a day. Before information like a senator’s phone number was kept strictly confidential, people would call them up at all hours demanding legislation that suited their needs.

How to call your congressperson

Unless you’re very lucky, or very sneaky, or very well connected, chances are you don’t have a rep’s home number these days. So what do you do?

You can find the office numbers for your representatives at senate.gov or house.gov.

When you call, you’re either going to leave a message or get an assistant or intern on the phone. (Don’t be insulted—congresspeople are busy.)

You can go one of two ways with this phone call. You can demand something or you can ask for help.

Asking for something might involve asking for a certain bill that will address a problem in your state, or asking your representative to vote a certain way on an issue.

Requesting help could be something like, “I’m trying to file something with the Social Security Administration and I’m having issues.”

Your representatives are your “people on the inside.” They’re not just there to make laws, but also to serve as a help desk to translate the obscure beast that is the federal government.

Does calling your congressperson actually work?

It really depends. Lawmakers often say that their drafting or sponsorship of a bill was entirely due to the fact that the constituent brought an issue to their attention.

Some congressional assistants admit that a lawmaker is more likely to be swayed by a personal email or letter.

If you want your legislator to vote a certain way, that’s a long shot. This is politics, after all. You’re competing for attention with lobbyists, special interest groups, and the polls. And sometimes a legislator is just going to vote their conscience and there’s nothing you can do about it.

Can you meet your representative face-to-face?

So, we’ve learned that contacting your congressperson does work, but also sometimes doesn’t. Is there anything else you can do to step it up? How do you light a fire under the people who are supposed to be representing you?

You can try one last option—a face-to-face meeting with your representative.

We’ll own to it—the chances of getting a meeting with a lawmaker are slim. Meetings are difficult to score, period. And chances are, you’ll sit down with an assistant instead of the person who’s really in charge. But know that just like with your call, email, or letter, this meeting will be logged and communicated in some way to the legislator.

How to request a face-to-face meeting

So here’s what you do:

– Call that rep’s office, ask to speak with whoever is in charge of the rep’s schedule, and request a meeting.

– Give a little rundown of what you’re hoping to talk about.

– Show up early. come prepared with your clear, concise ask.

Make sure you’ve done your research. Does the bill you’re planning to ask for already exist? Do you know your rep’s voting history up to this point?

And in the pre- and (hopefully) post-COVID-19 era, a handshake helps seal the deal. That and a little social pressure in the form of a call-to-action: “Can I count on your vote?”

Here’s one way to increase your odds of being heard. That meeting is going to mean a heck of a lot more if you personally represent a demographic that your representative needs to appeal to in the next election.

And if you’re a kid? Look the heck out—kids are political gold! You have real power as a kid asking for a vote for something you believe in.

To learn more about how petitions and protests work and what you can do to make your vote count, visit Unknown History on Quick and Dirty Tips. Or, you can listen to the podcast below.