Who’s responsible for the Electoral College? (Hint: There’s a wildly popular Broadway musical about him.) The Unknown History channel on Quick and Dirty Tips dishes on that and everything you need to know about the U.S. election process in the inaugural episode of the miniseries, A User’s Guide to Democracy. 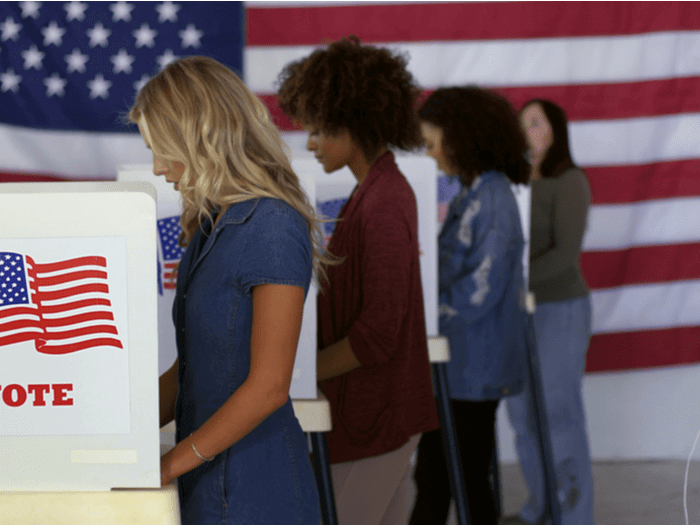 What are general elections and when do they happen?

You might be surprised to know that the election date isn’t actually mandated by the U.S. Constitution. Instead, it was the day picked by Congress in 1845 for presidential elections. And then elections for representatives in the House followed suit to make it the same day in 1872.

You might be surprised to know that the date for general elections isn’t actually mandated by the U.S. Constitution.

But why Tuesday? Well, some people had to travel quite a bit to cast their votes and they didn’t want voting in elections to interfere with religious services on Sunday. And why the first Tuesday after the first Monday? That was to avoid having elections fall on the first of the month because lots of merchants and landlords were tallying up their books on that day.

Elections for the federal government

Every two years in the general election, we fill whatever seats are open in the federal government. We just don’t fill all of them at the same time. Here’s how it works.

Each member of the House of Representatives (yes, all 435 of them!) is up for election every two years.

Senators have six-year terms. Their elections are staggered. When they’re elected, every senator is assigned to a class: one, two, or three. So, elections are held every two years for one-third of the Senate seats. (Senators in class two are up for election in November 2020.)

Every four years, the president is up for election. And given all the campaigning and the activity in the news, it’s hard not to notice!

Other types of elections

It’s worth mentioning primaries and caucuses. These are the elections before the general elections where we choose who we’re going to have on the ballot in November.

Presidential primaries are run by each U.S. state. Caucuses (which are rarer these days) are run by the political party.

What is the Electoral College?

When you vote for a presidential candidate in November, you are not voting for a candidate; you’re voting for a group of electors who belong to that candidate’s party. And they, in December, will cast their vote for the party.

Why do we do it this way?

This system was designed by none other than Alexander Hamilton. There were “so many things he hadn’t done,” but he did create the Electoral College. He wrote about its benefits in “Federalist No. 68,” an essay that was part of a collection of op-eds we now refer to as The Federalist Papers.

Hamilton wanted to create a bulwark of moral, manly men between the people and the presidential candidate.

Hamilton wanted to create a bulwark of moral, manly men between the people and the presidential candidate. This was in response to the fear that the framers of the Constitution had for democracy—or “mobocracy,” as they sometimes called it. Because what if—and we’re purely inhabiting the mindset of the framers here—what if the voters were uneducated? What if they voted for a candidate of no virtue who lied and cheated to win the hearts of the masses? The electoral college is a barrier to that. The electors would surely see the faults in the candidate and cast their vote for someone else, right?

How many electoral votes does a state get?

Two States—Maine and Nebraska—do it differently. Their votes can be based on their congressional districts.

And how do we decide how many reps a state gets? It’s based on the state’s population and therefore the census.

For example, Pennsylvania has 18 representatives in the House. And with their two senators, that makes 20 electoral votes. Whichever candidate wins the plurality of votes in the state of Pennsylvania, that candidate’s party casts all the electoral votes for the candidate. It’s a winner-take-all system.

What are “faithless electors”?

The framers of the U.S. Constitution made the Electoral College as a barrier. So technically, an elector in December could cast their vote for someone other than the winning candidate. It has happened a couple of hundred times in U.S. history. These electors who vote for someone other than the candidate chosen by their state’s popular vote are called “faithless electors.”

In the last month, the Supreme Court has ruled that states can pass laws to force electors to vote for the candidate that won in the state.

Will the Electoral College be abolished?

You may have heard a good deal of talk about abolishing the electoral college in favor of going with the popular vote. Is that even possible?

Frankly, it seems unlikely because it would require a constitutional amendment, which would require not only approval by two-thirds of both houses (which is doable) but also approval by three-fourths of all the states. And some states with smaller populations might not want to relinquish their electoral power.

To learn more about how U.S. Elections Work and what you can do to make your vote count, visit Unknown History on Quick and Dirty Tips. Or, you can listen to the podcast below.