The Sinking of the World’s Most Glamorous Ship

In 1956, a stunned world watched as the famous Italian ocean liner Andrea Doria sank after being struck by a Swedish vessel off the coast of Nantucket. The following is an excerpt from The … Read the article Stone walked back to the SS Californian’s rail and looked again towards the south. The three icebergs had drifted astern but he could … Read the article 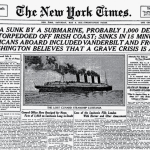