Home » World History » Love, Spies, and a Search for the Truth

Love, Spies, and a Search for the Truth

From Edgar-nominated author Brad Ricca comes the true story of a woman’s quest to Africa in the 1900s to find her missing fiancé, Boyd Alexander, and the adventure that ensues. Read on for an excerpt from Olive the Lionheart. 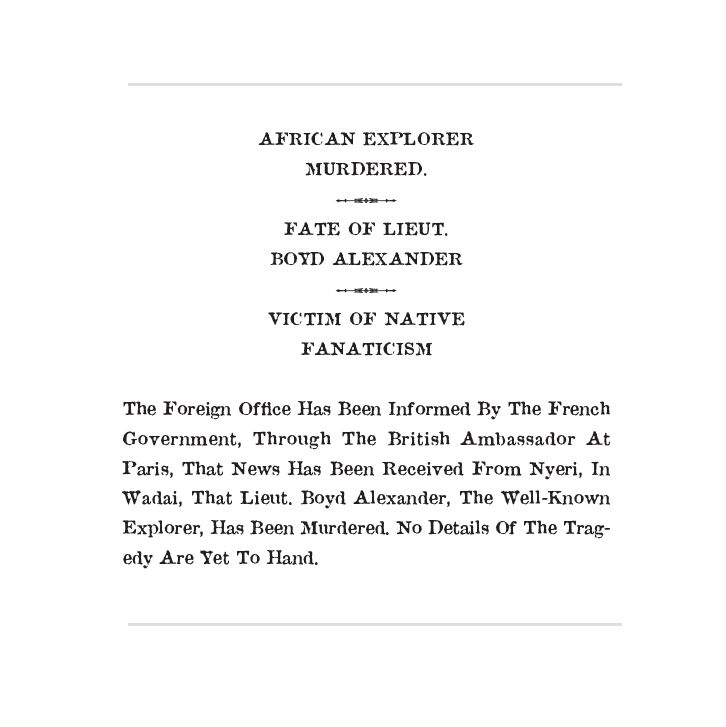 August 28, 1910: The SS Dakar Makes Its Way across the Atlantic and Down the Western Coast of Africa

Olive woke up, pulled on her skirts, and ran up to the deck of the ship. It took a moment for her eyes to adjust. She could see a long, brown coast, slick with the ocean. On it lay a city with a seawall, a white windmill, and a long wharf, all set below a gigantic blue sky. This was Forcados, and it was their last stop. Olive saw a cawing cluster of seabirds making their way to the coast, gliding on their outspread wings.

When the Dakar finally slowed, then stopped, Olive put on her new pith helmet to make things official. But instead of jungles or elephants, there were only boats and people, busy at their work. As Olive sat with her luggage, Mrs. Talbot came to join her as her husband went to secure their next passage. Olive tried to examine her face. Mrs. Talbot was still an enigma. Their mutual awkwardness was disrupted when men came onto the boat and started moving the bags. They also moved a large, heavy wooden box that Olive had brought from home. Olive’s heart fluttered when she watched them handle it.

“Careful,” she said to herself.

Olive heard some words in Hausa and craned her head, but she had no idea what they were saying. All she knew was that Africa was, as she had expected, beastly hot indeed.

By the time Mr. Talbot returned with a sheaf of papers in his hand, the heat had already reached a suffocating eighty-five degrees. Mr. Talbot had obtained the official documents from the governor’s office that would grant them passage all the way to Maifoni. Olive looked at these papers, rolled up and white. As Mr. Talbot made his way up the gangway, Olive was grateful for her friend.

Mr. Talbot had not returned alone. He was followed by a meandering line of native men and boys, all wearing different lengths of loose, white clothing. Mr. Talbot directed them to the luggage. Olive knew that they would have to hire many more natives to complete their final expedition. Olive watched them pick up her heavy boxes onto their backs. Mr. Talbot referred to them only as “the boys.”

Mr. Talbot led them off the ship to a different dock. The boys transferred their things to the Sultan, a smaller mailboat that would take them into Nigeria to the village of Lokoja. The paddle steamer was painted white in spots, made of wood, and had two thick stacks that chugged and puffed gray smoke into the sky. Mr. Talbot had a word with the rough-looking captain, showed him the documents, then slid them back into his inside pocket. Their passage on the Sultan had been arranged by no less than the acting governor of Nigeria, Mr. Charles Temple. Olive walked aboard, feeling quite important herself.

Below deck Olive squeezed through the narrow hallways to get to her room. She couldn’t believe it when she opened the door and looked upon an actual bed. She had not been gone from home for very long, not really, but the sight of a genuine mattress looked heavenly to her. There was no other furniture in the room, and they would have to cook their own food, but Olive didn’t mind. She unfastened her hair, removed her boots, and lay on the bed as it gave out a squeak. When the boat began to chug—in smooth river water—Olive fell quickly asleep.

The deck of the Sultan had a small sitting area covered by a striped canopy. The air was a little cold, but Olive and Mrs. Talbot could watch the shoreline go by like an endless painting scrolling out before them. Unfortunately, what landscape they could see was little more than an uninterrupted stripe of brown mud. This was not the emerald interior that Olive had dreamed of. They heard the paddles slap the filthy water beneath them.

The river narrowed, and they began to see a colorful transformation as everything changed from brownish sludge to vibrant flowers; from pale bronze to bright green. There were matted tangles of creepers that dipped into the water and exquisite orchids on the ends of thin green arms, curling out of the leaves. Olive saw a tall, bare tree that was almost completely white. She had to look harder to see that it was blanketed with egrets, which turned to look as the boat moved by.

From under her hat, Olive found this version of Africa to be much more like the gardens she had left behind in Vinters. Flower blossoms surprised them from every angle. There were some plants she had not even the words for. As they passed, Mrs. Talbot would point them out with an expert’s tongue: “amaryllis,” “yams,” “cassavas,” “bananas.” Variety colored everything.

Again Olive secretly inspected Mrs. Talbot, who now looked more at home on the damp boat, pointing out flowers and vines, than anywhere else Olive had seen her. At times Olive felt that Mr. and Mrs. Talbot must be perfect for each other, united by a romantic passion for natural biology and travel. But Mr. Talbot was always fiddling with his charts and instruments and was currently nowhere to be found. Mrs. Talbot pointed to the coast again.

The blur of green before them was interrupted by one, then two, and then whole clumps of thatched houses with palm-leaf roofs.

Olive caught glimpses of her first native village—she didn’t know of which tribe—washing their things by the river or moving in and out of their huts. Some of them looked up and stared, though most did not. Olive noticed that some of the houses had a carved statue or piece of cloth outside them.

“A juju house,” said Mrs. Talbot, sensing her curiosity. These were the places they worshipped their gods.

As they continued on the river, Olive saw children swimming near the docks by some of the larger villages. Laughing, they swam in complete, naked indifference. Olive thought it was picturesque to see them in such a primitive state. As she watched, Olive spotted a black-and-green pebbled rock float up from the water near the swimmers. It was moving swiftly.

“Crocodile!” she gasped. The animal was headed right toward the children. Olive took a breath to scream, but the children had already spotted the creature and swam away without the slightest fear or care. The children seemed as at home in the water as they did on the ground.

Sometimes the jungle would flatten, and they would see a plantation, the trees cut and beaten down to the barest dirt. At several of these places, the Sultan stopped to unload mail, and Mr. Talbot would leave to get supplies, disappearing down the thin path that vanished into the green jungle.

As they traveled farther up the river, their deck time became limited due to the weather, which was now downright miserable. Olive looked up to the gray sky and felt the raindrops starting again. She pulled her coat on. They headed below deck to eat. Mr. Talbot had laid in a whole stock of steamer foods. Olive greatly disliked the foul, assorted native vegetables that seemed intent to choke her, but at least they had a salted ham. Olive was not overly

fond of pork, but when combined with swizzled butter at a very high temperature, it was quite delicious. Afterward she stuck her head outside to find it raining wholeheartedly. The smell of their meal still filled the air.

“It rains here,” Olive said with a laugh, “in a determined Britannic fashion.”

Brad Ricca is the author of the Edgar Award-nominated Mrs. Sherlock Holmes and Super Boys, winner of the Ohioana Book Award for Nonfiction. He won the St. Lawrence Book Award for American Mastodon. Ricca lives and works in Cleveland.