October 7, 2014 marks the 13th “anniversary” of the war in Afghanistan (Operation Enduring Freedom). It was on this date in 2001 that the United States and United Kingdom began a bombing campaign against al-Qaeda and the Taliban. By this year’s end, American forces will have been drawn down from 30,000 to 9,800, which may or may not remain as trainers and advisors, depending on the Afghani government.

Time will write many histories of Operation Enduring Freedom. But within this longest war in United States history (the American Revolutionary War took just short of eight years) there beats a “heart of darkness” that was the bloodiest and most costly engagement of this war. Perhaps no other campaign is more emblematic of Operation Enduring Freedom as the Battle of Sangin (pronounced like “hangin”). These seven months of combat are a powerful microcosm of the war itself.

The Sangin Valley in Helmand Province is divided by the Helmand River. The river is flanked by farmland — corn and opium poppy are grown in their respective seasons — and this fertile plain is bordered on the rocky, sharply vertical mountains for which Afghanistan is well known. In pictures the valley appears both forbidding and beautiful. “Highway 611” — a dirt road — runs roughly the length of it.

In 2010 the Sangin Valley was a Taliban stronghold, under somewhat tenuous control of British troops. United States Marines of the 3rd Battalion, 7th Regiment, arrived in September to relieve the British, and were immediately confronted by Taliban flags, snipers, roads bristling with IEDs, schools closed by Taliban decree, shuttered markets and shops. The local farmers were being strong-armed by Taliban fighters, who extracted steep “taxes” upon the profitable Sangin poppy crop — money to be used for outfitting the Taliban and helping them inflict their fundamentalist, repressive beliefs on the villagers. 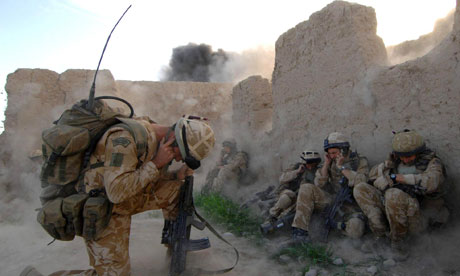 Royal Marines engaged in fighting the Taliban in Sangin, Afghanistan. Image is in the public domain via The Guardian.

Enter the 3rd Battalion, 5th Regiment of the 1st United States Marines (the 3/5) in early October. This was the legendary “Darkhorse” battalion, which was formed in June of 1917 as the U.S. prepared for World War I. The 3/5 saw action in that war and in every war since. They were much decorated, deployed from Camp Pendleton, California, and their motto was “Get Some.”

The fighting came hard and fast. The role of the 3/5, as an infantry battalion, was to locate and destroy the enemy. Patrols were mounted almost daily and contact was constant and intense. The Taliban were solidly entrenched in the mountains, able to stage motorcycle raids from the cornfields, charging suddenly upon on 3/5 Patrols. The roads and trails were infested with IEDs, the rocky ridgelines by snipers.

One Marine told me of his first engagement that October: Taliban fighters on motorcycles lit up his patrol from the safety of the tall corn, and the platoon jumped into the corn too, took cover and returned fire. He recalled not being sure if they even hit any enemy, so dense was the crop.
“We were surprised to hear so many motorcycles hidden out there in the corn,” he said. “After we took cover and fired, I remember lying there after emptying my SAW and we were all breathing hard. This was the first contact of the war for most of us. The air smelled like gunpowder and corn because the bullets had cut down so many cornstalks. No one was hit. A lot of us were laughing because we’d emptied our weapons but we’d hardly seen the enemy, let alone hit one of them. We were trigger-happy. Some of us we’re screaming — America! Get some!”

The battle raged through April. There were 520 firefights officially recorded (2.5 firefights per day.) So ferocious was the combat, Marines from Kilo Company of the 3/25 and Echo Company of the 2/9 were dispatched to Sangin because the Darkhorses were taking such heavy casualties. After seven long months the battle was over and Sangin Valley was a different place. The Taliban flags were gone and the fighters routed (470 estimated killed or wounded). Schools were open again (even schools for girls) and the long-empty marketplaces in town were bustling.
But by the time Sangin was secured, 25 3/5 Marines had been killed and another 200 wounded, many severely — more dead and wounded than any other Marine battalion in the then 10-year history of the war. (This heartbreaking record still stands.) Among the dead was the Lt. Robert Kelly, son of Lt. Gen. John F. Kelly, head of the Marine Forces Reserve, who would later preside over the emotionally wrenching 3/5 Gold Star Family Memorial at Camp Pendleton.

The ceremony took place on a blustery April day, atop a helicopter-landing zone surrounded by green hills, the sprawling camp, and the glittering Pacific close by to the west. “Gold Star Families” are those with sons or daughters killed in combat, and these families were flown in from across the nation to join the thousand-or-so remaining Darkhorses.

The purpose of the ceremony was to remember and memorialize what the 3/5 had accomplished. The battalion’s 25 dead were represented by their battlefield crosses: boots, rifles, and helmets arranged on stands in a gently curving formation. The wounded were brought in from military hospitals in San Diego, Palo Alto, Texas and Washington, D.C. Many were amputees; others wheelchair bound for life, some blind, many unable to properly care for themselves. And many of those who were outwardly healthy and standing at attention during the long day carried their own inward scars. I talked to some of these men a few weeks later. Some were already moving past Sangin, into new lives. Some would never really leave Sangin. Some just wanted to get back to there to fight again.

Addressing the somber, grieving participants, Lt. Gen. John F. Kelly, who had written scores of condolence letters, said, “These Marines did what Marines always do. They took the fight to the enemy and they won.”

One of the Darkhorses I talked to not long after Sangin had come home to Pendleton, gotten a job delivering pizza on base, and was looking forward to life as a civilian — wherever it might lead him. He was interested in studying psychology. He was also interested in making some money in the oil fields in Texas. He was 22 years old. We talked for hours and I sensed that he was ready to move on, but that a big part of him would always be in Afghanistan. “I don’t regret fighting in Sangin,” he said. “I’d go again — or not.”

T. JEFFERSON PARKER is the bestselling author of numerous novels, including Storm Runners and The Fallen. Alongside Dick Francis and James Lee Burke, Parker is one of only three writers to be awarded the Edgar Award for Best Novel more than once. Parker lives with his family in Southern California. His latest book is Full Measure