My novel, Trial by Fire, is based on the true story of the aircraft carrier USS Ben Franklin (CV-13) and the brave sailors who were able to save their ship after she was nearly destroyed off the coasts of the Japanese home islands in March 1945. The big blue fleet, as it was called in Navy public affairs circles, had come to Japan itself to demonstrate that the war was approaching its climax. Task Force 58, Adm. Raymond Spruance, victor of Midway, commanding, consisted of 65 ships, including 18 heavy (big deck) carriers and 9 light carriers. The task force closed to within 100 miles of Honshu Island and began conducting strikes against airfields, weapons factories, and railroads.

After three years of relentless war, the Imperial Japanese Navy had been ground down to a shadow of its former strength. Her few remaining battleships and carriers were languishing in port for want of fuel and crew. Naval Intelligence estimated that the Japanese were down to 2000 to 3000 effective combat aircraft and even fewer qualified pilots, especially after the so-called Marianas turkey shoot, where over 645 planes and their pilots had been swept from the skies of the Philippine Sea during the Marianas campaign. Now Army Air Force B-29 heavy bombers were laying waste to Japan’s big cities, launching from airfields on Tinian and Guam.

Naval Intelligence was wrong, however. The Japanese, realizing that an invasion was inevitable, had secreted nearly 6,000 aircrafts—bombers, fighters, torpedo bombers—many of whom were the survivors of Japan’s lost aircraft carriers. They’d been dispersed into the countryside, where they hid out in farm buildings, hillside tunnels, and groves of trees. They were kept out of sight and out of action while the Americans tore up the naval air stations. But on 19 March, a small flight of carrier bombers dashed out to show the overconfident Americans that Japan wasn’t quite ready to give up. One of them managed to catch Franklin in the middle of a launch and dropped two bombs. The first, a 500-lb. armor-piercing bomb, struck the tightly packed flight deck, whose every inch was covered in fully armed, fully fueled strike aircraft. The second bomb went through the flight deck and down into the hangar bay, where more planes were waiting for an elevator trip to the flight deck.

The resulting conflagration led to eight hours of explosions and fire on the flight deck and throughout the hangar deck. Eight hundred of her crew and air group were killed, many becoming one with the tortured, superheated steel of the decks and bulkheads. Hundreds more had to leap into the sea to keep from being immolated. Hundreds more escaped the volcanic fires and explosions back aft by dropping into the sea between the carrier and a light cruiser who’d come to get people off the obviously doomed ship. The Japanese, sensing blood in the water, sent more bombers out to finish the job, but they were shot down or chased away by other ships. By the end of the day, there were only a few hundred ‘effectives’—uninjured men who could do damage control, rescue trapped shipmates, and counteract the ship’s list—left aboard out of a crew and air group of 3600 men.

Somehow, they saved her. Some genuine heroes crept down passageways filled with smoke, heat, and firefighting water to extract hundreds of suffocating people from hot compartments underneath the hangar deck. Engineers re-entered main spaces, filled with stack gas, oil smoke, and gasoline fumes dripping down from the hangar bay and flight deck, where they managed to re-light a boiler. One boiler meant they could generate electrical power. A second boiler meant she could begin to escape the vengeful Japanese, who kept coming throughout the night, piercing overcast skies with magnesium flares in an effort to find her. First under tow by a heavy cruiser and then under her own power, she made her way to the Ulithi anchorage, where the sight—and the smell of her—horrified the dozens of American ships anchored there.

When she made it back to Pearl, senior officers from all the headquarters toured the burnt-out husk of an Essex-class aircraft carrier, many of them cutting short their tours to be sick. She then managed a 12,000-mile trip back to the Brooklyn Navy Yard, where the Navy, mostly in an act of defiance, ordered that she be repaired and returned to duty. There were occasions during the repair effort where shipyard workers broke into sealed compartments only to find more carbonized victims. The war ended before the repairs could be completed and so she was sent to the mothball fleet and eventually scrapped.

P. T. Deutermann is the noted author of many novels based on his experiences as a senior staff officer in Washington and at sea as a Navy Captain, and later, Commodore. His WWII works include Pacific Glory, which won the W.Y. Boyd Award for Excellence in Military Fiction, The Hooligans, The Nugget, Sentinels of Fire, The Commodore, Ghosts of Bungo Suido, and The Iceman. He lives with his wife of 50 years in North Carolina. 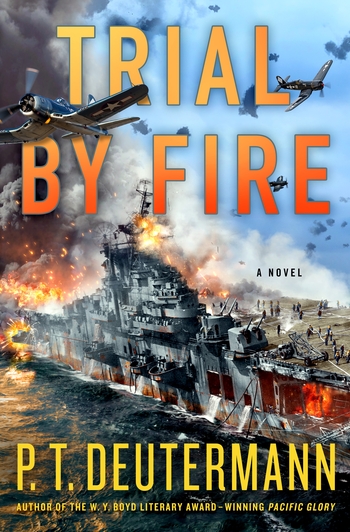